In the endless depths of (electronic) music, there’s no anchor like a discerning, committed record label. Chris Adams seems to have lived by this truth in his twenty-plus years as a recording artist; after spending the better part of a decade with Hood on Domino, Adams launched his current project, Bracken, on the celebrated American electronic label Anticon. Like Warp Records in the UK, Anticon has long stood as a beacon of excellence and innovation in the genre, with its artists’ tireless collaboration spurring onward the growth of the entire collective.

Now on his second release with Chicago’s BARO Records (whose relationship with Anticon Records personnel goes even deeper than Bracken), Adams’ pedigree is on full display. High Passes finds the artist in dialogue with the painstaking, boundary-less electronic music luminaries of Anticon, Warp, and beyond.

Each piece on the record takes sounds you are certain you’ve heard somewhere before and drops them into a refreshing, at times revelatory new context. “Slow Release” meshes Geogaddi-era Boards of Canada percussion with the sort of gritty, mid-band synth hits you might expect on a Oneohtrix Point Never single, while one of Bibio’s classic synth leads shines through the murk of “Branch Hid Sky.” “Guiding Hand,” replete with acoustic guitar and cello, recalls the pastoral, downtempo work of ex-Hood bandmates’ The Remote Viewer (who are truly incredible), and “Masked Headlands” finds Adams toying with the neo-classical themes of a Benoit Pioulard composition.

Adams is not simply a skilled musical interlocutor, but also a careful craftsman on his own terms. Perhaps most alluring are his expansive percussion toolkit and his expressive vocal performances. From “Ghostly’s” overtly plastic ride hits to the refreshing subchained washes of “Ravenser Odd II,” Adams artfully mixes electronic samples with more organic percussion tracks. Nowhere is this more clear than on High Passes‘ pièce de résistance, “Half Recalled,” where Adams judiciously tweaks the reverb and repeat parameters of the stellar brush-driven backbeat for maximum effect.

Similarly, Adams’ vocal tracks – a mix of sampled phrases and more traditional, lyrical vocal performances – testify to his songwriting prowess. In the vocoders of “How is this a Cure?” and the sample-based melodies of “Ghostly,” in the solemn harmonies, steeped in reverb, of “Masked Headlands” and “Half-Recalled,” Adams has crafted memorable soundscape after memorable soundscape.

The intentionality and disarming melody of these compositions endow High Passes with staying power. And in the vast expanse of electronic composition, I for one am confident it’s worth paying attention to what BARO does next. 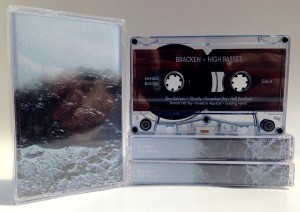 High Passes is out now on BARO (US) and Home Assembly (UK) on tape and can be had as a 2xLP from Norman Records (UK) and various worldwide distros.