What is left of the somali sound

Somalia has always been a problematic land. Mostly arid and inhospitable it has been, from the colonial competition era, the theater of natural, social, economical and political issues. Strongly divided by english and italian domination, the colony has faced dictatorships and uprisings and warlords’ clanic divisions that totally jeopardized the country and led to a crisis that worsens by the time.

Surprisingly this did not prevent artists and musicians to create a very lively and vibrant artistic phase of somali history. 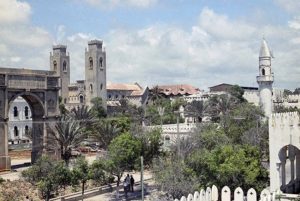 In this article we’ll try to take a peek into the history of somali music between the 70s and the 90s, focalizing on what remains of these bands and how two fantastic tape labels are trying to save it.

After the fascist dictatorship in WWII and its defeat, in 1950 Italy returns to Somalia under a UN trusteeship, committed to bring the country to independence in ten years. In 1960 the main objective for the people is to reunite somali groups trapped in other lands such as Kenya, french Somaliland and Eritrea.

Unfortunately no progress was made. Somalia had to face a failure due to the total support that western nations gave to the three aforementioned colonies. At this point, the only choice for Somalia was to take the comunists’ side. While remaining almost neutral, they could benefit from military aid. In this way Somalia managed to reach a balance between powers involved in the big net of political interests that cold war created.

The situation changed dramatically after 1969, when a indipendentist party allied to Somaliland, the SYL (Somali Youth League) had won.

The party became more and more authoritarian. In October of the same year the president Muhammad Egal got assassinated. In the mounting political crisis Mohamed Siad Barre, commander of the somali army, seized power, establishing a brutal marxist dictatorship while opposing to the local clan loyalties. 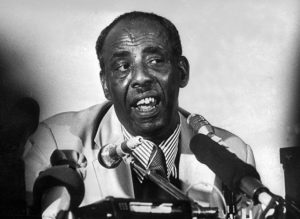 As a consequence, a massive censorship was imposed. This obviously damaged newspapers as well as literature and music. Given these premises, is interesting to note how poetry and music, less controlled means, compared to information handled by the mass-media, became the principal instruments to speak about the present and the social/political situation.

Bands such as Dur-Dur Band openly refused to write songs about political topics and ignored the pressures of the government. Instead, they opted to propose a love-oriented unifying message that would configure itself as a form of subversive counterpower.

In a period of great insecurity and political strifes, artists and especially musicians found a way to be active as ever and, eventually, fight the power in a pacific and passive way.

In this scenery, mostly in the eighties, we see the apparition of several bands that will define the well known “somali sound”: a mixture of rock, arabian and latin music, funk and proto-reggae inspired by artists like Santana, Michael Jackson and Phil Collins. These golden years of somali music gave birth to artists like the already mentioned Dur-Dur Band, Qadiijo Qalanjo, Iftin and others.

This very peculiar style got sadly lost after the defeat of the Ogaden. In 1977 Siad Barre attacked Ethiopian garrisons in the Ogaden but, as Ethiopia had been believed to be a better ally, he was betrayed by the Soviet Union. In 1978 the Ethiopian army used the military power given by the USSR to take back Ogaden. As a result, guerrilla groups, clan-based and regional, were formed in and around Somalia to topple Siad’s regime. By 1988 the result was full-scale civil war, resulting in the overthrow of Siad in 1991. Siad Barre decided to retire to its own clan and to become just a warlord among the others.

Many of the musicians producing music in the eighties were forced to move out of Somalia or died during the civil war. Most of the material got lost or was impossible to find. What remains is a bunch of cassette tapes containing singles or radio broadcasts and VHS displaying shows in which the musicians used to perform. 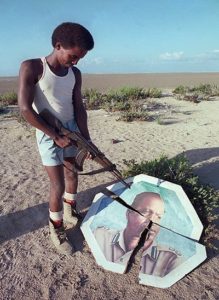 A first trial to rediscover and save this music was made from the american blog / label Awesome Tapes From Africa. This label, led by the ethnomusicologist Brian Shimkovitz, has undertaken the responsibility to find, in place, the grooviest and finest tunes that made Africa dance from the 60s up to the 00s. The biggest merit of the label is to have rediscovered and brought to the people great acts such as Ata Kak or Hailu Mergia, who are now playing live shows around the Globe.

Thanks to him the masterpiece Volume 5 by Dur-Dur Band (1987) was republished in 2013 and achieved a great success. This brought the somali sound to the public once and for all. The work itself is obviously gorgeous. Volume 5, with its tender but emotionally heavy sound, fully represent the genre. Funky guitars, synthetic drum sounds, groovy bass, afro-reggae reeds and one of the most impossible languages on earth makes this record a real rarity in music history. 12 tracks that you can easily find on tape or cd with the original graphics.

As I said, it is also true that many more bands left audio and video witnesses that deserved to be gathered and republished. This time Çaykh Recordings came in help. It seems that the Berlin based label, of which still not much is known, has undertaken an even more hard and frustrating mission: try to gather the greatest number of witnesses, records and tracks from the golden era of somali sound.

This first experiment resulted in a tape called Au revoir, Mogadishu (songs from before the war): a 90 minutes mixtape of great somali music by less known artists such as Libaaxyada Maaweeliska Banaadir, Waaberi, Kooxda Halgan and obviously the already mentioned Qadiijo Qalanjo, Iftin and Dur-Dur Band. The graphics are beautiful, the mix is perfect and it really evokes beautiful atmospheres and heartbreaking stories. I don’t know, maybe i am just really into far, antique, mournful voices.

I don’t really know if the label is planning other releases like this one. Trustable sources told me the guy is trying to put together a second mixtape. I hope for the best, almost all the people are dead or just impossible to find.