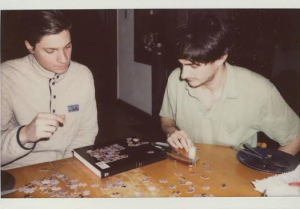 With a perfectly dreamy and wonderfully forlorn sound, Hales Corner releases the debut album of the project titled Garden View on Darling Recordings. The album achieves a perfect balance of wistful gloom and thoughtful contentment; it feels a little something like wearing your favorite sweater on a stormy afternoon spent by the sea watching the steel grey waves break on the shore. Hales Corner creates a sound in their album that feels both nostalgically familiar and intriguingly new; like returning to a favorite place after years of absence. Musicians Wes Cook and Caleb Adams join together on the project, which serves as an extension of their already formed friendship and individual identities as musicians, and created their album to be released on cassette through Darling Recordings.

As a preview of the album, premiering off Garden View, the track “Josef K” offers up beautiful complexity musically and delightfully wistful vocals, truly showcasing the talents of both Wes and Caleb and reflecting the overall apathy-meets-empathy vibe of the album. Do yourself a favor, and take a listen to the track now below. You can also purchase this album on clear cassette tape with a full color j-card here.

I had the opportunity to talk to Wes and Caleb about forming Hales Corner, putting out their album on cassette, and how it all began in a freshman art class.

Tell me about where the name “Hales Corner” comes from and how you started the project.

Wes: As far as the first question goes, I was born in Hales Corners, Wisconsin, so basically that’s where the name came from. I just dropped the “s” off of it because we thought it sounded better.

And so then, how did you guys start the project together?

Caleb: so, I guess there’s like a short answer and a long answer. The short answer is, Wes and I graduated and spent a couple years out in the real world, and uh, just started talking about music again, and um, we’d never really worked on a project together or anything like that and we had both kind of done our own individual things, and we both had like a few songs that we were trying to release, to just get out there, so we were talking to Nick [of Darling] about doing, kind of like a split album together of both of our just solo projects, and um, yeah, then this goes back to the long answer. Wes started playing back when we were like freshman in college, and uh, we’d written a couple songs together and um, we’d decided once we were talking about doing the split thing to maybe throw a couple of those songs on there to bring it back to life, and um, we started playing on those and we liked it and we figured, why not just start a whole new thing and keep writing songs. It just became a new project.

Wes: Yeah like two of the songs on the record are like four or more years old actually, we hadn’t played them in like three of four years actually.

So it’s like a revival for both of you guys in a lot of ways then?

So as far as this album goes that’s coming out with Darling, what did you want this album to tell people like what kind of story is there behind it, or anything in the songs that you want the world to know?

Wes: I suppose that, I mean the headspace I was in when I wrote all the lyrics, and I feel like the headspace too that Caleb was in when we were playing the songs was sort of um, this post-college apathy, and just, we’re out into the real world now but, I have no idea what I wanna do, and I guess that a lot of people our age are dealing with that and I think that it’s an album about kind of coping with that, and trying to find a focus despite like how much of a whirlwind everything seems.

What’s been your favorite part of the process surrounding the album so far?

Wes: I think that like collaborating and like, recording this myself was probably one of the most fun things. It was like super education for me too like I learned so much, trying to record it and, also just collaborating with Caleb on songs, it was just like a really nice relationship.

Caleb: Yeah, I totally agree, Wes is an insane musician and he’s always writing like really weird stuff and like really challenging stuff for me to play with, and I feel like the most fun I’ve had is definitely being pushed in that direction with things that aren’t just simple and mindless, but stuff that’s a bit more challenging at least for me as a guitarist.

To go back to the beginning, how did you both meet?

So are you both just stellar at drawing then?

Caleb: [both laughing] uh we try, we both try, [laughs] I think it’s definitely just a hobby for both of us.

How would you describe the overall vibe of your music, especially pertaining to this album?

Wes: ohh that’s a tough one, what do you think Caleb?

Caleb: ohh boy…okay I was talking to Nick one time and he said something about it being like uhh lazy sunshine rock and I kinda like that. [laughs] I feel like there are some dark elements to it though too.

Wes: yeah definitely, that doesn’t make a good sound bite though but uhh [both laugh]

Wes: I would say it sounds kinda like being on the beach but uhhh yeah I don’t know, that’s hard.

How did you guys meet Nick, how did this whole thing start?

Wes: I worked with Nick at Secretly Canadian Distribution and then like basically, I just shot him a few songs or like he heard a few songs, and we just starting talking and he has like “I’m gunna do this Darling thing” and yeah he said we should get something going and it’s been going pretty well so far.

So your album is coming out on tape, why did you guys decide to go for a cassette release?

Caleb: Well, that was kind of Nick’s idea and also most of my friends in Bloomington have their albums on cassette and um, my one stipulation was I just wanted people to be like actually able to listen to it, so as long as they can get it online too like as long as they can get like a digital version cause not everyone has a cassette player, but I was like yeah that’s cool cassettes are pretty neat.

Caleb: Yeah and with that said, I do have a lot of friends that listen to cassettes and I used to have a car that had a cassette player and I would just pop them in all the time, but I don’t anymore…but I do like them as a format for sure.

“Wesley Cook was born in Hales Corners, Wisconsin. Grew up in a little town in Indiana known for caskets and hospital beds, then went on to pursue a Philosophy degree at Indiana University in Bloomington, where he met Caleb Adams in a drawing class their freshman year. Caleb had lived in Fort Wayne most of his life, coming to Indiana University to study Religious Studies and English.

Early on they formed a music-driven relationship, bonding over bands like The Velvet Underground, The Kinks, The Nerves, Radiohead, Deerhunter, Devendra Banhart, and Elliott Smith, they soon began casually playing music together. For the next few years they played sporadically at best; the occasional wine-driven dorm-jam, a few lazy Sunday collaborations. Every once in a while a song would emerge, melodies that just floated without resolution, left to be the object of nostalgia and not much else.

Fast forward three years, both Caleb and Wes were over a year out of college and had experienced what seemed to be no small amount of the grind that is adult life. Caleb had just quit a cubicle job to drive across the country to a fresh start in LA.

Unfortunately, on the way his car broke down twice, the second time leaving him stranded in Oklahoma but for an Uncle that lived in Colorado and was able to tow him and his car back to Indiana. Emotionally deflated and unwillingly placed back in Fort Wayne, his Los Angeles plans were slowly forgotten.

Meanwhile Wes remained in Bloomington, playing in bands and working a warehouse job at Secretly Distribution.

Slowly the two began talking again, sending each other demos and eventually sprouted the idea to put out some sort of split release.

However, after getting together a few times they began writing songs collaboratively and soon enough had enough material to put down an entire album.

Truly a sum that is greater than it’s parts, Hales Corner was born out of foiled plans and apathy in the face of the looming future during the early winter of 2015.” (Bio Courtesy of Wes Cook and Caleb Adams).