As is the case with many music scenes, the sheer vastness and diversity of the ambient music movement can act as an inhibitor to discovery and enjoyment. With the exception of genre’s Pantheon – lauded, veteran innovators like Eno, Reich, Vangelis – ambient musicians rarely break into public consciousness and are often merely an afterthought in the burgeoning underground music scene. And much like any other subgenre, ambient music suffers from uninspired composition and  regurgitation of classic formulae, further complicating the search for authentic, compelling voices in the tradition.

I remember fondly my own induction into the modern ambient music: it was rather accidental, as I recall. Browsing the Holy Page tape distro a few summers ago, I stumbled across “Bibleoteca Nod Out,” by Portland-based ambient musician Ant’lrd. I listened to the album all summer, reveling in the understated complexity of texture born of instruments, analog hiss, tape decay, and non-musical samples. Thus began a foray into the vaguely definable ambient netlabel world, which, to this day, has me discovering compelling artists with regularity.

Looking for an entry point into ambient music? Let me propose to you Braeyden Jae and Ant’lrd’s new split cassette on Whited Sepulchre. I hope this provides some of you a painless avenue to begin or continue a patronage of the so-called ambient music world, one whose intersection with United Cassettes’ titular interest in the cassette tape is well documented. 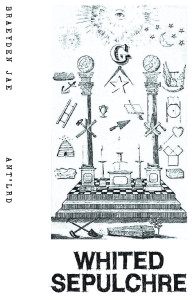 It took me much longer than it should’ve to get acquainted with Salt Lake City’s own Braeyden Jae. Nevertheless, his split with Ant’lrd has served admirably as a gateway into his rapidly-expanding discography. His contribution to the split, three extended drone pieces, exhibit a careful ear attuned to the holy trinity of ambient music: melody, texture, and dynamics.

Braeyden opens with the deceptively hummable “Soft Reunion,” a restrained and aching marriage of synths to static. His second cut, “Endless Endings,” evokes October Language-era Belong, subduing melody in favor of judiciously-employed clipping textures. Closer “Infinity Charm” occupies the middle ground, focusing instead on dynamic development, weaving melody and tape hiss in and out of the stereo field.

Fast-forward the tape to the end and flip it over – it’s time to visit Ant’lrd’s side! Here we have two suites split into three movements each, a mixture of longform drones and looped synth experiments enmeshed in Ant’lrd’s signature lo-fi paradigm. Like Braeyden Jae, Ant’lrd is a master at balancing texture, melody, and dynamics – “Dream River Artifact” brings focuses more on the melodic side, while “The Dark Between the Stars” explores looped passages treated with static, hiss, hum, ambiance.

With Ant’lrd, the infusion of the non-musical is more subtle, and even more haunting for that. Is it the tapes he’s recording to? Clever layering of noises and found sounds? The synths – or are they Casio keyboards instead? We may never know, and that’s one of the beauties of the experimental music tradition. Every piece is a flirtation with the familiar, sounds you can’t quite place.

You can purchase the split cassette from Whited Sepulchre’s Bandcamp, along with Braeyden Jae’s first full-length LP, “fog mirror.”