Once deeply valued for their ability to discerningly illuminate the deepest corners of the vibrant and diverse underground scene, landmark music criticism outlets are now so deeply concerned with the state of pop that they have dissolved their founding concept for the Clear Channel / MTV model of forced, prolonged exposure of a same select few artists. With self-styled “hip” music critics so deeply invested in grooming up-and-coming performers they deem worthy of promotion – usually for the purpose of accruing or returning industry favors – to the pop festival circuit tier of journalistic regard, the term “independent” music has lost most of its cultural significance.

Indie as a cultural moment, however, is far from over, as Richmond four-piece Antiphons proudly announce on their debut album. Groan is a blurry-eyed, hands-in-your-pockets homage to early-2010s guitar-driven indie that, in true post-modern fashion, creates just enough distance between the original to warrant examination on its own terms. This is most evident in the stylistic tendencies of each band member. Vocalist and primary songwriter Brian Dove displays exceptional dramaturgic awareness. On “Tiny Rooms,” his falsetto wavers pleadingly at the most sensitive junctures before snapping defiantly back into confidence. Bring in his and Tommy Terrell’s guitar work – plenty of open chording slathered in distant reverb – and the ensemble begins to recall Local Natives’ Hummingbird period. It doesn’t hurt that Dove’s voice is a dead ringer for Kelcey Ayer’s, either.

Like the most classic of indie ensembles, Antiphons’ rhythm section of Ben Medcalf (bass) and Matthew Stinnet (drums) play primarily in the pocket, accentuating the various rhythmic peaks and troughs in Dove’s compositions with tact and timeliness. On the ovlovian “Rotten Apples,” the duo get their chance to shine, with Medcalf’s pulsating bassline morphing into inventive harmonic counterpoint and Stinnet’s brilliant snare-driven extended fill underlaying the track’s spacey outro. 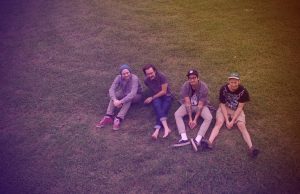 Ultimately, Groan does much more than provide engaging music to offer insightful texts. Dove’s lyrics remember teenage America: self-loathing and romance. Identity and crisis. They cut deeper or shallower, depending on how vivid or fond your memories of growing up are. And, as the album’s title and somber orchestration indicate, Dove’s fondness for his own teenage years is wearing thin. By the time the closer rolls around, he finally makes peace with his old self. At least to declare: “It’s cool to be alive / most of the time.”